We've Got Music and More...

From popular local area bands to national and hall-of-fame music acts, the USA Days has music for everyone! Every single day of the festival has a performance that will fill the night with music and laughter.

Come be entertained for free while you fill up on awesome eats, drinks and the sounds of the midway. Look  for the full schedule of bands and entertainment! The Annual Heart of Ohio USA Days has a “new and improved” festival planned this year that truly has something for everyone!  Remember that admission is free as well as parking!

HEART OF OHIO USA DAYS FESTIVAL
WILL CONTINUE PARKING SHUTTLE
After much consideration the committee for the USA Days festival has decided it cannot make use of the parking area the Oldtime Farming Festival has implemented. There were many factors involved in this. First of all, they would have to pay to have field mowed as well as pay a fee for use of the field. Secondly shuttles would need to be rented or secured as well as tractors to pull them. Then they would need to find drivers for them. Also the new safety regulations would require parking customers to not walk on the roadside but they also are not wanted to walk in the yard of the home that sits there. Finally, the parking area is in a low spot at the bottom of the hill and if it should rain it would be unusable. And the biggest factor is that the committee simply does not have the manpower to handle all of this.
Therefore, as last year, we will continue to have lots of free parking at the Centerburg High School just west of town. Free school bus shuttles will be offered on Friday evening and all day Saturday from after the parade till after the fireworks. The roadside turnaround on 314 will not allow any parking as that will be the pick-up/drop-off point for the buses. This system worked very well last year with no problems, therefore it seemed to be the better option for us to continue for the foreseeable future. Of course, handicapped parking will be available in the park as well as for vendors and entertainers. Anyone who wishes may find alternate parking in town and use the sidewalk or trail to walk to the park from there.
There is motorcycle parking available in the lot near the water tower, right across from the park entrance. Only motorcycles are allowed to use this lot! The opening will not be large enough for cars to use!
Also, FYI,  the big tree in the park blocked fireworks from their new location. At the bottom of the hill they can be viewed fine. Therefore, the grassy area along 314 on the outer side of the driveway will not allow any parking this year. It will be roped off as will the lower hill as the prime seating area for the fireworks display. Make note of that when choosing your spot!

Back this year is an even bigger and  better beer garden!  Located near the stage you can enjoy a brew as you enjoy the music beneath a shading tent!  Sponsored by the 1834 Midway Tavern, Jason and Teresa Harter, you can pick your favorite brewski and try the signature 1834 brand! The beer garden will not be open on Thursday evening.  Location is just across the drive by the stage to allow band viewing.  It will be enclosed and is not adjacent to the rides or kid’s areas.  There will be some rules in effect to prevent any problems. It is hoped that this will add to the festival in a positive way as well as generating funds for the festival budget. 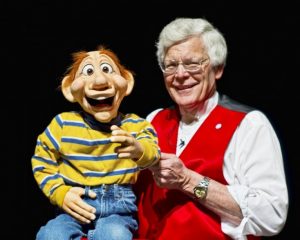 Thursday, June 16th is Kid’s Night!  Back this year is the great Remy and Friends!  He does ventriloquism, magic, juggling, balloon sculpting and more!  Kids of ALL ages will enjoy his fun show!  Kids will also be chosen to assist him with some tricks!

Friday, June 17th  will kick off  at  6 pm with Acoustic Harmony bring back lots of memories of those oldies but goodies! First formed in 2019, Kevin Gault and Tim McCauley began performing an acoustic blend of songs from the decades of the 60’s and 70’s to the delight of audiences around Ohio. From The Beatles, to America, Neil Young, Tom Petty, Jimmy Buffett and many, many more. They will guide you on a musical journey through the past, with strong vocal harmonies and solid arrangements that are sure to please.

At 8 pm Friday The Ohio Express will take the stage.  The “King of Bubble Gum Rock”, Tim Corwin began with a band in Mansfield known as Sir Timothy and the Royals. Lead singer Tim Corwin performs with Jeff Burgess on keyboards, Warren Sawyer on rhythm guitar and keyboards, John Baker on lead guitar and Bill Hutchman on drums. The group soon recorded an album called “Beg, Borrow and Steal”, with the title song being their first chart hit. They went on to record their biggest hits “Yummy Yummy Yummy” and “Chewy Chewy” of which both went gold in 1969. Other chart hits include “Down at Lulu’s”, “Goody Goody Gumdrops” and “Mercy”.  They are also in the Rock and Roll Hall of Fame! You are sure to be tapping your feet and clapping your hands and most likely singing along to these classic hits!

Don’t miss a minute! Saturday, June 20th is always the big day!  The Annual Parade kicks off at 11 am from the Church of Christ beside the high school and moving on Main Street to the park.

The park will open at noon after the parade and a short concert by the Centerburg High School Band as the flag is raised.

The third annual kids’ State of Ohio Sanctioned Tractor Pull will be held on Saturday as well. Registration time will be at noon and pull times will begin at 1 pm. Winners move on to the State of Ohio finals at the Hartford Fairgrounds and if they win there they can move on to the Nationals at the Corn Palace in Mitchell, South Dakota! One of our first year’s contestants made it through the state finals and went to the Nationals! This is open to both girls and boys up to age 11.

Calling all Princesses! At 1 pm we will again our annual Princess Party with some beautiful Disney princesses on stage in the afternoon to sing their signature songs and have a short singalong and dancing with the children! This year we have the Little Mermaid, Ariel and Snow White!  After the stage show they will head over into the shady area and happily talk to the aspiring princesses as well as pose for pictures at no cost. They will be there to greet you until 5 pm!

The Beer Garden will open Saturday at 1 pm so don’t let the heat get your down!

At 4 pm the lovely Jamie Sagle takes the stage! A girl with a guitar up all night writing the songs she hears in her dreams. Jamie Sagle is an energetic local artist with a passion for songwriting, co-writing, recording and performing. She has taken an active role in the songwriting community and loves encouraging other writers to be heard and stay inspired. One of the many ways she does this is getting involved in workshops and local non-profit organizations for songwriters and musicians. Jamie performs at various venues and events in and around Columbus and hosts Cidery Songwriter Night once a month at Seek-No-Further Cider in Granville, where she brings in the best artists from Central Ohio to share the stage with her and they take turns sharing their songs and stories. She recently released her album “Lights & Wire” available to purchase at shows or on any streaming or downloading platforms.


If you are really ready to rock at 8 pm you will get your wish when Rumspringa takes the stage! Rumspringa is a 4 piece hard rock band out of Columbus, Ohio. Inspired by the music giants of decades past such as Led Zeppelin, Van Halen, and AC/DC. Rumspringa delivers a sound that is exciting and energetic, all while remaining true to their rock and roll roots. With their debut album coming in 2022, Rumspringa will be playing a mix of their original music along with covers by the classic hard rock bands that inspired them to pursue their dreams. Rumspringa is: Matthew Warren: Lead Vocals Cody Schrecengost: Lead Guitar Jimmy Weaver: Bass Guitar Jaxson Tackett: Drums. Social media and website info Linktree with all socials: https://linktr.ee/Rumspringa Website: https://www.rumspringa.live

At 10 pm the annual fireworks extravaganza will take place.  The bottom  of the hill in the  park is roped off as is the grassy area between the drive and 314 to prevent  parking which allows everyone to bring their blankets or lawn chairs for the prime viewing area!  Patriotic music will accompany the show! Mark your calendars now!  You won’t want to miss a minute!

PLEASE NOTE!!! In case of heavy rain or other inclement weather, we will be taking our bands to an alternative location at the Centerburg High School. The show must go on! Stay tuned to our Facebook page for more information!  Also if our parking field gets flooded just drive to the high school at the opposite end of town for school buses to shuttle you to and from the park!  We do everything we can to keep the festival operating! But meantime pray for good weather after 5 years of flooding problems! We are due for a dry festival!