Grand Marshals will be the family of Captain Peter Hayden Chapman USAF.  He was the only local hero we lost in Viet Nam and a true hero to our town.  He deserves to have recognition! A special surprise is in the works that everyone will love!  Once all is confirmed we will waste no time in letting you know about it!  Read his story and see his picture below!

Peter Hayden Chapman II, aged 31 years, a resident of Centerburg, Captain in U.S. Air Force, was killed in action on the 6th of April, 1972 in Vietnam during the Vietnam War. He was flying in a helicopter that was shot down and was missing in action for 25 years. Peter was born on the 26th of August, 1940, the son of Peter H. 1900-1981 and Dorothy J. [Bone] Chapman 1908-1997. Captain Peter Chapman’s remains, found, recovered and returned to authorities by farmers in Vietnam were returned in 1997 and are now buried in Lock Cemetery, Licking County, Ohio. Some of the remains were also buried in Arlington National Cemetery.

Chapman’s story is amazing. He was a Centerburg High School graduate of and went into the Air Force shortly thereafter. He piloted a C-141 transport plane out of California for years, taking troops and supplies to Viet Nam during the war. On the return trips he transported the bodies of fallen soldiers.

He later piloted the Super Jolly Green helicopter. Jolly Green 67 (tail number 68-10365) was an HH-53 long range rescue helicopter assigned to the 37th Aerospace Rescue and Recovery Squadron (ARRS) at Da Nang Airbase, South Vietnam. Crewman included SGT James H. Alley, TSG Allen J. Avery, CPT Peter H. Chapman, CPT John H. Call, SGT William R. Pearson, and TSG Roy D. Prater (all KIABNR). It was downed by enemy ground fire on 6 April, 1972, while attempting to rescue two American airmen who had been shot down and were hiding behind enemy lines. Chapman was not supposed to pilot that mission but the pilot that was to go was married with a family. Chapman was single and so he told the other pilot he would volunteer to pilot the mission. Little did he know just how big that sacrifice would be.

This was one of the key events in what would become the largest rescue operation of that war, the rescue of Bat 21. Bat 21 was an EB-66 electronic jamming and reconnaissance aircraft. On 2 April, it was hit and destroyed by a North Vietnamese surface to air missile as it and another EB-66, Bat 22, escorted three B-52s as they bombed advancing North Vietnamese units invading South Vietnam at the beginning of what has come to be known as the ‘Easter Offensive.’

Only one crewmember, Lt Col Iceal ‘Gene’ Hambleton was able to eject from his stricken aircraft. His personal call sign for the rescue operation was Bat 21 Bravo. Immediately, US Army helicopters tried to rescue Lt Col Hambleton. But the North Vietnamese guns drove them off and downed one – a UH1 ‘Huey,’ call sign Blue Ghost 39. Three of its crewmembers were killed and one was captured. The captured soldier was released by the North Vietnam a year later. The bodies of the other three were eventually recovered and buried in Arlington National cemetery in April, 1994.

The next day, Jolly Greens from the 37th ARRS made two attempts to pick up Bat 21 Bravo. Both times, they were driven off with heavy damage to their aircraft. Additionally, an OV-10, call sign Nail 38, was hit and downed by an enemy missile. Its pilot Capt Bill Henderson, was captured. Its navigator, 1Lt Mark Clark, call sign Nail 38 Bravo, was able to hide and await rescue like Lt Col Hambleton.

For two more days, rescue forces fought the weather and the enemy forces to try to rescue the two airmen. They could not get in. Instead, hundreds of airstrikes were put in to beat down the enemy gunners. But the 6th of April, dawned bright and clear. So, after 42 more airstrikes were put in, a rescue force of four HH-53s and six escorting A-1 ‘Sandy’ aircraft launched to make another attempt to recover the two evading Americans. They were assisted by several forward air controllers in O-2s and OV-10s and numerous other support aircraft. Jolly Green 67 was designated to make the rescue attempt. But as it came to a hover over Bat 21 Bravo, it was raked by heavy enemy fire. The escorting ‘Sandy’ A-1s tried to engage the enemy guns. But they could not get them all. And they could see what the ground fire was doing to the helicopter. So several shouted for the crew to fly out of the area. The crew of Jolly Green 67 aborted the rescue attempt and tried to maneuver their stricken aircraft to safety. But the enemy fire continued and so damaged the craft that it crashed in a huge fireball a few kilometers south of the survivors. The fire was intense and lasted several days. There were never any indications of survivors.

The Sandy pilots were shocked by the turn of events. The other helicopters were ready to move into the area and make another attempt. But Sandy 01, the leader of the taskforce was not willing to risk another aircraft. He aborted the mission. It was just too dangerous.

The next day, another OV-10 supporting the rescue, call sign Covey 282, was shot down in the same area. The pilot, 1Lt Bruce Walker, call sign Covey 282 Alpha, was on the ground and evading like the two earlier airmen. His crewman, US Marine 1Lt Larry Potts, was never heard from. With this news, General Abrams, the overall US commander in Saigon directed that there would be no more helicopter rescue efforts for the now three downed flyers.

Instead, a ground team was formed to attempt to infiltrate through enemy lines and pick them up. It was planned and directed by US Marine Lt Col Andy Anderson, and lead by US Navy SEAL LT Tom Norris. From 10 through 12 April, the team operated through enemy lines and rescued 1Lt Clark and Lt Col Hambleton. They also intended to rescue 1Lt Walker. But on the 18th, he was discovered by Viet Cong troops and killed. The rescues were over.

Later, Lt Tom Norris would get the Medal of Honor for the mission. This was the largest sustained rescue operation of the war. Over 800 airstrikes, to include B-52s, were put in in direct support. Numerous helicopters, A-1s and forward air controller aircraft were shot down or damaged. A total of eleven men were killed. But it was all done in the best traditions of the rescue forces. Their motto was: ‘ That Others May Live.’ During the war, they rescued 3,883 downed American or allied airmen, sailors, marines and soldiers and made it possible for them to return home. And finally, we welcome you home, Jolly Green, and salute you proudly for a job well done.

At Arlington National Cemetery in 1997, a quarter century later, the funeral service for the Jolly Green 67 crew began with a fly-over by two MH-53J Pave Low III helicopters from Hurlburt Field, Florida. The Air Force Honor Guard and Air Force Band from Bolling Air Force Base, Washington, D.C., also helped commemorate the event. Among the mass of people at Arlington paying respects to the helicopter crew were red beret-wearing para-rescuemen who honored their fallen comrades. The veterans also represented para-rescuers who served in Southeast Asia and rescued more than 3,800 service members during the war.

Among those who could not attend the funeral was Bat-21 himself; however, the 78-year-old Hambleton wrote about how much he appreciated the sacrifice of the Jolly Green 67 crew. Dan Manion, one of many para-rescuemen who helped search for Hambleton, read the letter. “This is a crew of real heroes,” Manion said. “They were doing what they had been trained to do. They deserve all the accolades that we, the living, can bestow upon them. Again, I thank them, I honor them, and I will always hold great faith in my heart with them.”

Chapman had four memorial services for Chapman, still remembered around his hometown of Centerburg. Chapman’s relatives were notified that some of his bone fragments, along with those of three other crew members from the crash on April 6, 1972, had been positively identified. “It’s kind of shocking because you think it’s over,” said Jean Huffman of Centerburg, who is one of his surviving sisters.

Advances in DNA technology allowed the Armed Services DNA Identification Lab to make the determination. The remains had been recovered in 1988 and had been in the lab since then.

The family had a funeral in 1972, when Chapman was declared killed in action. Then in November 1997, his family had a full military funeral for him and buried what remains had been identified, tooth fragments, in the family plot in Lock, Ohio. The most amazing thing happened during that service. It was a rainy day, mourners stood under umbrellas and soon they heard the telltale sound of a flyover of the jets when one flies off on its own, symbolizing the missing man. As those planes flew over the sky opened up and the sun shone brightly for those few seconds and as the planes disappeared from sight the sky closed and rain again began to fall.  A goosebumps moment for certain!

There also was a military funeral in Arlington, Va., in November 1997 when a single headstone for all six crew members was erected.

Huffman’s son, retired Air Force Maj. Brad Huffman, of Delaware, said he idolized his uncle and chose to follow him into the Air Force. Chapman also is remembered with an annual award to a Centerburg High School senior who exemplifies the values he stood for.

“He was like a big brother to me,” Maj. Huffman said. “It’s an emotional time because it does bring up old wounds, considering the war ended in 1973 and we’re talking about it all these years later.”

Huffman was actually able to pilot the very plane his uncle had flown!  He is also the only Centerburg alumnus who has graduated from a service academy as he graduated in 1974 from the US Air Force Academy. Three of Chapman’s six sisters survive and will be on the float, Jean Huffman, Carol Evans and Beth Murphy. Brad Huffman and his sisters Jeana and Julie will also ride as will Brad’s son, Hayden.

A book and a movie starring Gene Hackman, both entitled “Bat 21” were made about the rescue mission.The Centerburg History book has an entire chapter with all the information on Chapman’s life and the final mission.  Candy McCracken, who researched and wrote the history book said that even as an elementary student she knew who Hayden was. He played football, played in the band, and it seemed everybody loved Hayden. A nicer, kinder young man you could never find. He was also quite handsome! The books are on sale at the front desk at Hometown Market in Centerburg for $20 and the money from the sales goes back into the festival. 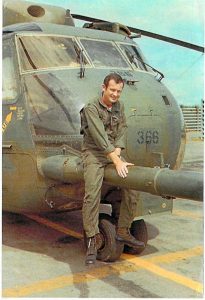